The B: Efficient Award is an award bestowed by the Junior Chamber of Karlsruhe. The Junior Chamber is a group of young, independent contractors and local office executives under the age of 40. The group consists of approximately 160 active members and in 2014, its motto was "added value".

After 2012 the B: Efficient Award was presented this year for the second time. The award honours companies from the Technologie-Region-Karlsruhe for sustained, responsible and effective achievements. The jury for the competition is composed of members from industry, the sciences and from its own members. The team was highly impressed by the efforts of Michael Koch GmbH, placing us in second place behind a non-profit organization.

The success of the tender was a cause of great joy to all employees of Michael Koch GmbH. Our commitment to the cause of sustainability in the environmental, economic and social sense was rewarded. This success confirms our actions and encourages us to walk further down this path together. 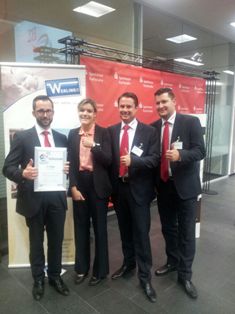