Winner in Baden-Wuerttemberg in 2007, as primefinalist now also near the top of the nation: In the competition "Grad Prix of Medium-Sized Enterprises" we were awarded the Oskar Patzelt Foundation's second highest award over all. At the award´s gala dinner in Berlin at the end of last year our management was clearly surprised to receive the statuette of the premier finalist in a festive atmosphere. Shortly after the ceremony the award was duly celebrated in our little factory. 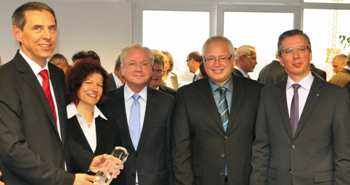 We were nominated by the Regional Economic Development of Bruchsal and persevered in the face of strong competition from over 300 companies from all over Germany. In the five sets of criteria, the Federal and final juries of the Oskar-Patzelt-Foundation were convinced of the very positive assessment: Overall development of the company over the last five years, creation and securing jobs and training positions, innovation and modernization efforts in the region and in the areas of customer-oriented service, customer relations and marketing. A steady increase in sales and growth to over 30 jobs to date over the past five years - both with an upward trend - our company is proof of the dynamic nature of midsized enterprises. Five trainees, the study courses at the Cooperative State University and many pupil and student internships as well as direct contact with schools illustrate that our company and related small businesses are extremely involved in the future of young people as well as the region. This includes the various voluntary commitments of the owners and
employees in local politics, many institutions and associations.

The SME initiative is based on the Oskar-Patzelt-Foundation that has awarded the "Grad Prix of
Medium-Sized Enterprises" for the last 17 years. Although the prize is purely symbolic, more companies take part in it every year. In 2011, 3,600 took part.

No other competition has reached such a large and persistent positive response. The prize bestows honor and public recognition but no financial rewards. 36 "Grand Prix" are awarded in twelve groups of states, and from 2007 the premier, premier-finalists and honorary plaques on a national basis. Nominated companies represent the entire spectrum of middle class industries, organizations and ownership forms that have proven to be economically successful and socially active.

The academic Benchmark Study 2011 chose the "Grand Prix of Medium-Sized Enterprises" as the most important economic award in Germany judging an overall view of a company and not just individual aspects such as innovation or growth. Every year, companies are sought across the various branches of industry, the trades, service and marketing that exhibit excellent developments combined with a strong commitment to the region. The initiative is completely voluntary and privately funded and does not involve a single Euro of the taxpayer..