The Innovation Award of Baden-Württemberg 2013

Our dynamic energy combination DEK combines a buffer module and an uninterruptible power supply in one unit. With the DEK we were able to convince the jury of the "Dr. Rudolf-Eberle Prize", the Innovation Award of the State of Baden-Württemberg.

The prize and recognition are awarded to medium-sized enterprises for outstanding developments and applications related to new technologies. In 2013 we were selected for the finals from a total of 98 entries with eight other companies. This recognition was the third award we received in 2013 for one of our products. This makes us very proud.

The Innovation Award of BW, i.e. the "Dr. Rudolf Eberle Prize" is one of the first awards, which were awarded in Germany for innovation. In 1985, the prize was awarded for the first time and it has since become an important symbol of the highly developed culture of innovation of the state of BW.

The innovation prize is awarded each year to small and medium size enterprises in Baden Württemberg. These are companies from trade and industry and from the technological services sector. It recognizes exemplary achievements in the development of new products, processes and technological services. Also included are the application of modern technologies in products, production and services. In the period from 1985 to 2012 a total 2,164 applications were received. Until then, 147 companies were awarded the State Prize, seven with a special prize and 165 with a recognition.

For the award ceremony we were invited to the Ludwigsburg Castle. 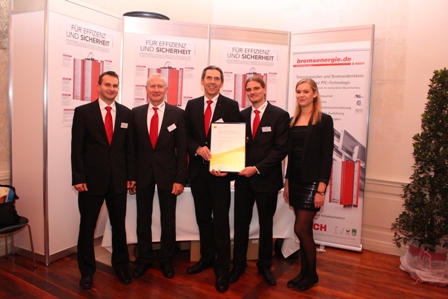