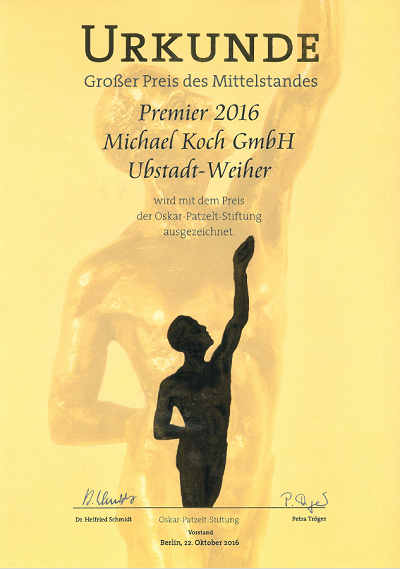 Koch are the German Champions, so to speak. At the nationwide gala of the Grand Prix of small and medium-sized enterprises, Michael Koch GmbH from Ubstadt-Weiher was awarded with the “Premier”, the highest award of the highly-regarded SME awards. Only three companies received this prize for SMEs on a federal level, which is, in contrast to sports, a unique and therefore special occasion. The visibly surprised managing partner Michael Koch and his wife Christine received the award during a festive ceremony.

Michael Koch GmbH is established in the market with innovative and adaptable products and a high degree of service since nearly 20 years. The safe brake resistors and dynamic energy storage units for the electric drive technology can now be found in many stationary, electrically driven machine types of almost all industry sectors. As a supplier for globally active drive technology companies as well as many notable machine manufacturers, Koch managed to make an impression as a reliable company in the industry. Competent employees, individual application engineering and high-quality products are only three reasons that have contributed to this success. The employees fully stand by the ambitious targets, because besides having secure jobs they participate in the success of the company.

Nominated by the municipality Ubstadt-Weiher, the Michael Koch GmbH prevailed over a total of 4,796 companies from Germany. They were able to convince two jury levels of the Oskar Patzelt Foundation in the five criteria groups for the evaluation: overall development of the company over the past five years, creating and securing jobs and training positions, innovation and modernization, engagement in the local area and in the customer-oriented areas service, customer proximity and marketing. By doubling the turnover and almost an equally strong growth of jobs over the past five years, both with a continuously increasing tendency, the company shows the dynamics of medium-sized enterprises. With currently four trainees and three students at the Dual University Mannheim, numerous school and university student internships as well as direct contacts to regional schools, Koch makes it clear that especially small companies care about the future of the youth and region. This includes the diverse voluntary engagement of the owners and employees in numerous organizations and clubs.

“We did not expect this award at all. This makes us even happier to have received the Premier,” Michael Koch expresses his happiness about the awards ceremony. “Smaller companies are often not noticed by the public and their performance is rarely acknowledged. It is very important that such a middle-class initiative exists!” This refers to the work of the Oskar Patzelt Foundation that has been offering the Grand Prix od medium-sized enterprises for 22 years. Although the award is not endowed, more and more companies are participating in the contest. The contest evaluates companies as a whole instead of their single aspects such as innovation or growth. Annually, they look for companies with an exceptional development and strong engagement in the region across the sectors industry, craft, service and trading. The initiative is organized completely voluntarily and financed privately, without one euro coming from tax money.

During his welcoming speech, the initiator and founder of the foundation, chairman Dr. Helfried Schmidt, stressed that all companies should receive daily applause and encouragement, “because they preserve the rare gift to organize their work in a way that jobs are created for third parties.” Besides the awarded companies, banks and municipalities, another warmly welcomed guest was Richard Kühnel, Head of the Representation of the European Commission in Germany.

The Michael Koch GmbH continues to strive for growth. “We still see good opportunities, especially with our innovative products and in an international environment,” Koch explains. Things are looking good for a continuously positive development of the company. 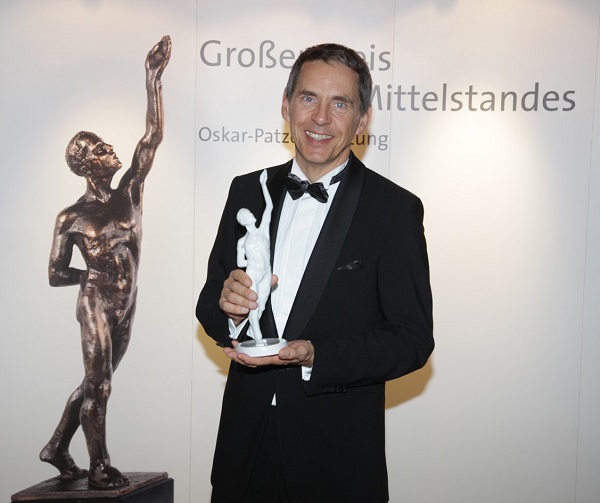