Premier-plaque of honor of SME 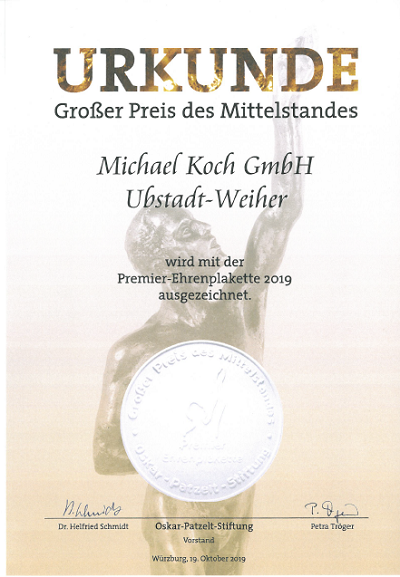 Michael Koch GmbH was awarded with the “Premier-plaque of honor“ at the nationwide gala of the “Grand Prix for small and medium-sized enterprises“ in Germany. Only three enterprises are honored with this award throughout Germany. This unique and therefore very special honor was presented to the managing partners Christine and Michael Koch in a festive setting.

We not only established on the market, Koch also worked their way up to the top of this award. After achieving awards on a state level 2006 and 2007 they accomplished their first award on a federal level in 2011 and crowned this success with the “Premier“ in 2016 which made them the German champion. To be able to receive such an award, companies have to continue their way successfully at least for two years straight. Koch has now achieved this. “Just fantastic, incredible – this is the result of perfect team work“, said the surprised CEO, Michael Koch, directly after.

Koch were able to establish on the market since day one with innovative and adaptable products combined with a perfect solution for customer satisfaction. The safe brake resistors and systems, which manage energy of electric drives perfectly, can meanwhile be found in various machines in almost every industry. They were able to leave a mark with being a global, reliable supplier for companies which function in electric drive engineering. Qualified employees, individual applications and high quality are just three reasons which made them successful. Koch employees constantly support the company’s ambitious targets and do participate in the success of the company besides having a safe job! Promoting internationalization while strengthening the local engagement and also being innovative combined with a constant decrease of the negative environmental impact is part of their corporate philosophy. The Koch’s rely on their active employees and the unswerving persuasion to dare the impossible. Koch produces carbon- neutral since many years!

Nominated by the community Ubstadt-Weiher the “Fabrikle“ (nickname of the company) was able to prevail against 5.339 other competitors throughout Germany. They convinced both juries in all five categories: overall development within 5 years, creating jobs including trainee opportunities, innovation and modernization, engagement in local activities as well as in customer satisfaction and last but not least customer service and marketing. Michael Koch GmbH impressed outsiders with the dynamic of a midsize enterprise which strongly increased its sales and jobs during the past five years. They currently have five trainees, two students who are studying at Baden-Württemberg Cooperative State University and various different internships throughout the year which makes it more obvious that the company cares about their social responsibility and the future of the younger generation. They are volunteering in many associations as well.

“We did not expect this award at all. I was utterly surprised and I am beyond happy!”, so Christine Lieber- Koch after the award ceremony. She also said that midsized enterprises as well as women have to be extraordinary to be given public recongition. It is quite necessary that there are initiatives like this! Thus, she commends the work of the Oskar- Patzelt foundation which is responsible for this award for 25 years. Even though the award is not endowed there is a constant increasing number of enterprises which participate in this competition. The most important fact is that enterprises get considered as a whole. The initiative is organized entirely on a voluntary basis and privately financed, without one euro of taxpayers' money.

“This award inspires us. Despite the current continuous boom and the global confusion, we still have visions to refine us and there are still some open doors and chances to take”, so the convinced CEO, Michael Koch. There is a bright look-out as well as good signs for further positive development!