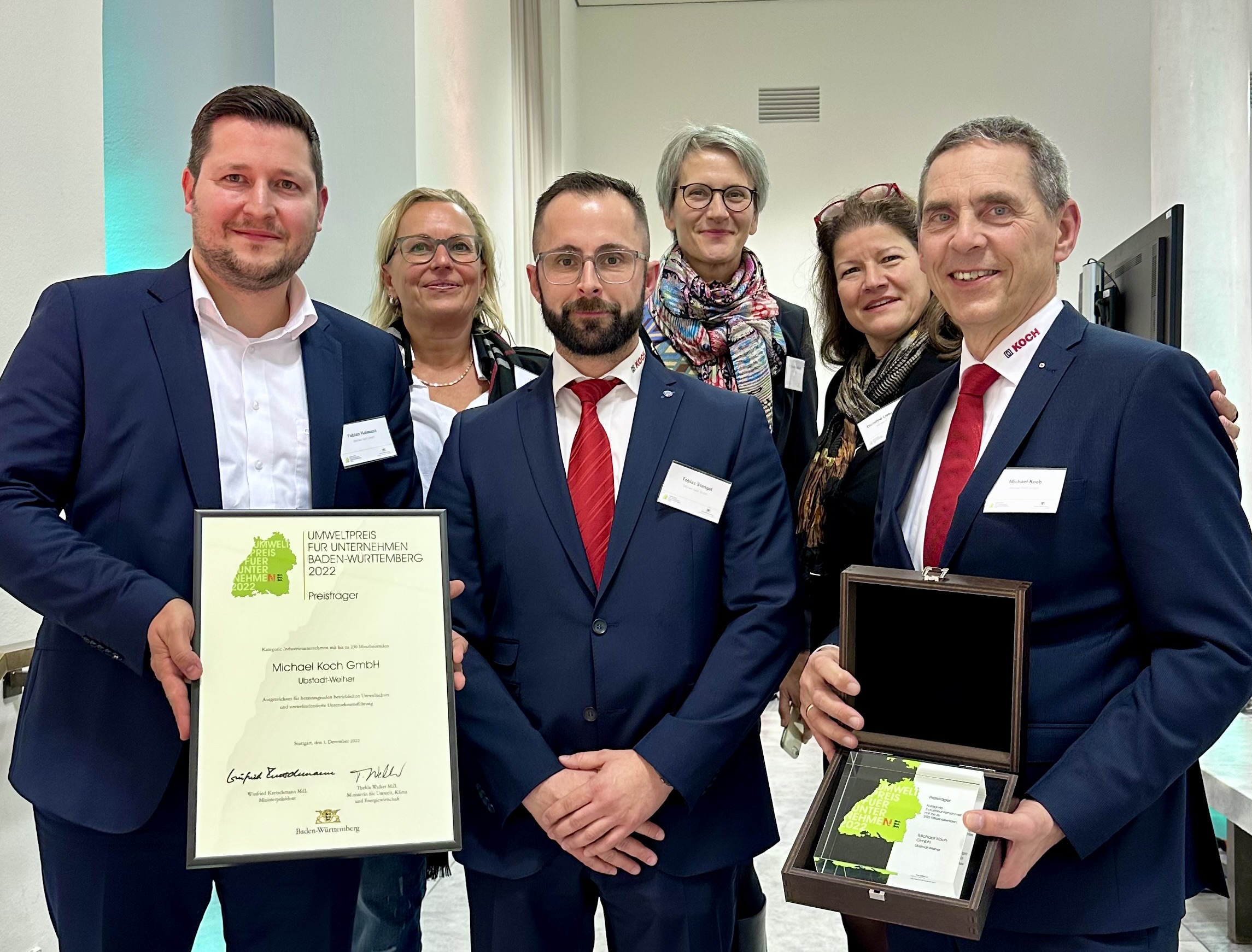 In the "Industrial company with up to 250 employees" category, Michael Koch GmbH was awarded the 2022 environmental prize of the state of Baden-Württemberg. Michael Koch and environmental management officer Tobias Stengel received the coveted prize and a certificate from the hands of Environment Minister Thekla Walker. This makes the Fabrikle an environmentally oriented beacon of well over 8,000 industrial companies in Baden-Württemberg with between 20 and 250 employees.

Based on the 17 sustainability goals of the United Nations and certified according to the European environmental directive EMAS for more than 20 years, the Koch company and its employees not only set themselves ambitious goals, but also implement a large number of measures in concrete terms. The list of activities ranges from species protection to the generation and use of regenerative energies, a fully electric vehicle fleet and heavily subsidized e-bike leasing to various sports groups and support for youth and sports promotion projects from clubs and the community. This holistic approach, which is pursued by the Fabrikle, was convincing at both stages of the competition: After examining the documents, a highly competent jury visited the Fabrikle on site in Ubstadt-Weiher and finally came to the well-known decision in comparison to the other applicants.

Right from the start, it was important to the founders, Christine Lieber-Koch and Michael Koch, to know the negative environmental impact of their company in detail so that they could minimize it by taking suitable measures. A convoy project with several companies and under the direction of the Karlsruhe Chamber of Commerce came at just the right time in 2001. "We still have a lot of ideas," says Stengel, "that we want to implement together with customers, suppliers and the community. It's good to have a competent advisor at your side." Environmental consultant Ulrike Jäger from Bruchsal has been with the company since then and therefore sees the award as recognition of her own work. For the Fabrikle, which is already working climate-neutrally, this is going on and on.

This also applies to the company's products that are used in electrical drive technology. They ensure optimal energy balance for the drives, reduce energy consumption or ensure a longer service life for the electronics used. "The field of application is huge, we serve the demand worldwide," explains Koch. "In the end, it's about using scarce resources of whatever kind in a targeted manner and conserving them." A project to which more and more companies are committed. The combination of sustainable ideas and black figures promises a good future for the factory.

The State of Baden-Württemberg’s Umweltpreis für Unternehmen [Environmental Prize for Companies] is awarded for business commitment and performance which has made a decisive and exemplary contribution to protecting and conserving our environment. The environmental prize is awarded every two years. When awarding the prize, the focus is on the company being exemplary and pioneering in terms of environmental and climate protection, resource conservation and energy efficiency. The diverse measures taken by Michael Koch GmbH, in which the employees in particular are involved, convinced the jury. "We're continuing on this path, because that's the only way we can make the necessary changes," says Koch optimistically.